The reason why the Administrator can start to look for a solution on disk conversion from Thick to Thin on VMware ESXi is that thick virtual disks are taking up more storage space than they need. By default, the type of the newly created virtual disk on VMWare ESXi is Thick Provision Lazy Zeroed format, which adversely affects the future performance of the system. It’s better to use Thin Provision or Thick Provision Eager Zeroed (in this case, the entire disk space is filled with zeros, slowing the process of creating a disk, but increasing the speed of work in the future).

Types of Virtual Disk on VMWare

Note that if the disk space on the datastore is exhausted and the thin disk cannot be expanded, the virtual machine will stop working.

Hint. Using PowerCLI, you can find out used and provisioned disk size for a specific virtual machine:

There are three different ways for converting Thick to Thin Provision Disk:

Using the Storage vMotion feature of a VMware vSphere, you can relocate any virtual machine with a disk to a different VMFS datastore (different LUN) without interruption of services and applications in a running VM. During a migration of VM disks between storages, you can also change the type of the disk.

To get the current disk provisioning type for the specific VM, you have to open its settings in vSphere Client and check the value of the disk type field. In our case, the type of virtual disk is Thick provision lazy zeroed.

To change the disk type, you should move VM files to another datastore.

Tip. If you have only 1 VMFS datastore, you can create a temporary additional NFS file share on any Windows server and connect it to the ESXi server via NFS. 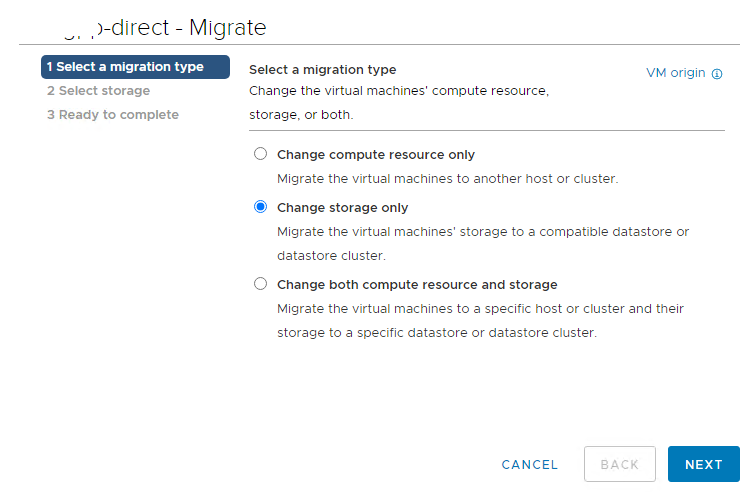 Now in the Select virtual disk format field, choose which format you want to convert the vmdk during Storage vMotion. Select Thin Provision as a virtual machine disk format and choose one of the available VMFS/NFS datastore on which you want to move the VM files. Click Next. 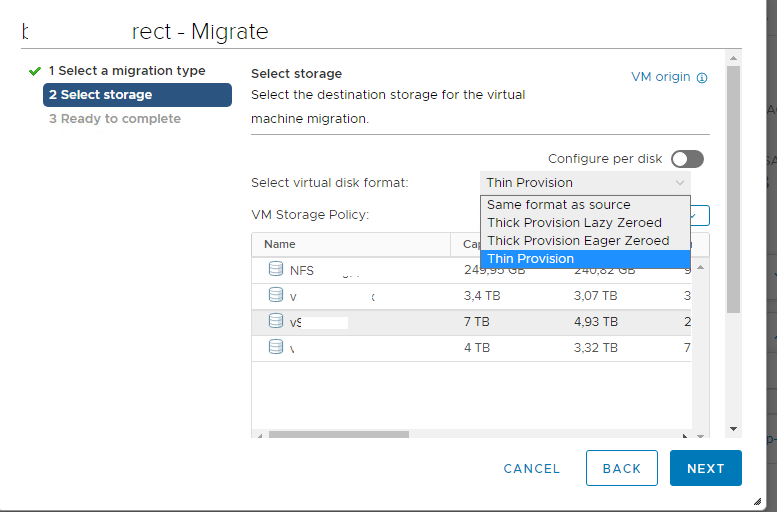 Now make sure that the type of the disc is changed to Thin provision.

Tip. When migrating a virtual machine to any storage other than the VMFS file system, virtual disks are always converted to Thick format and will take up their maximum size.

At first, you should power off your VM. To connect to the ESXi host CLI over SSH, you have to enable SSH service in the ESXi settings and allow incoming connection on TCP/22 port (open on the ESXi host: Configuration > Services). Select the SSH service and press Start. 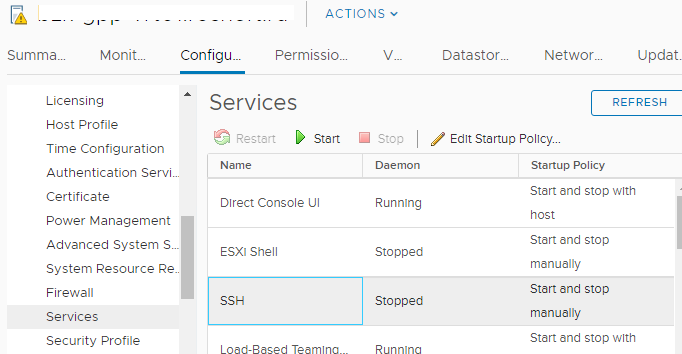 Connect to ESXi server as root using a favorite SSH client (for example, Putty), and change directory to the vmfs/volumes:

And go to the folder, containing your VM files.

We are interested in the file w10rtm-test.vmdk. To convert this file from Thick to Thin, run the following command:

Note. Before starting disk conversion, make sure you have enough space to convert the virtual machine’s disk from thin to thick.

And rename the resulting Thin disk: 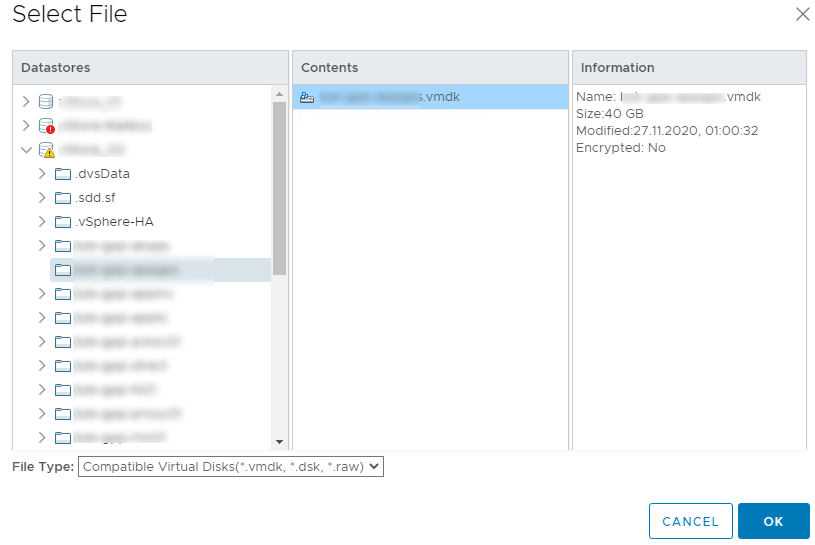 Now, you can power on your VM.

VMware Converter Standalone is a free application that can be installed on Windows to convert physical machines (P2V) or virtual machines (V2V) to VMWare format.

Using VMware Converter, you can convert a VM to a new VM on the same ESXi host, but with a new disk format (you can even reduce the provisioned size of disks, which is not supported in vSphere Client). 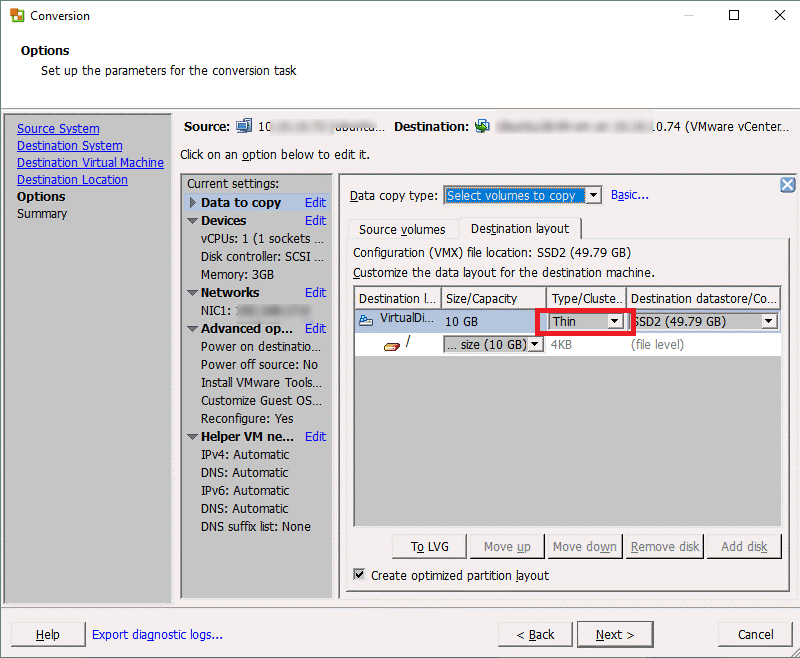 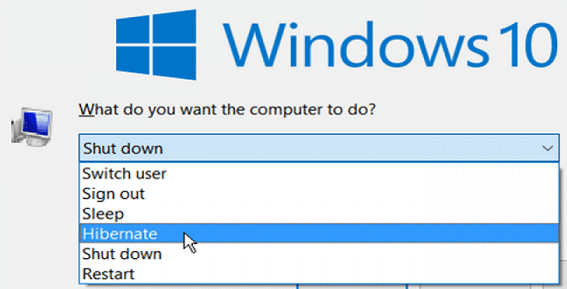 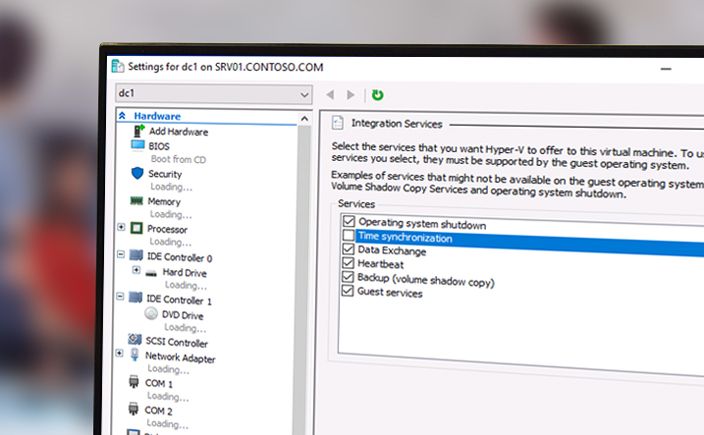