In all versions of Windows Server (from Windows Server 2000 to the latest Windows Server 2019), multiple remote desktop connections are allowed. However, the number of simultaneous RDP sessions is limited with two. This means that only two administrators can simultaneously connect to the server via RDP under different accounts (in Windows Server 2003, another, the third one console rdp session was available, for which you had to use the mstsc /console or mstsc /admin command). To use a remote connection, an account must be a member of the local “Administrators” or “Remote Desktop Users” group. However, if a general administrative account is used for administration, under which several admins in a team perform technical tasks (on-duty administrators, domain administrator account, etc.), then when you connect the second RDP session user under the same account, the session of the first one ends with the message:

Another user connected to the remote computer, so you connection was lost. Try connecting again, or contact your network administrator or technical support group.

To understand which user kicked out your remote session, open the Event Viewer console and go to the Windows Logs > Security section. Filter events by the Event ID 4624. You will find the events of the latest RDP logins on this computer with the user name and remote computer name (or an IP address).

You can enable two simultaneous RDP sessions on a Windows Server using special group policy setting or by modifying the registry. 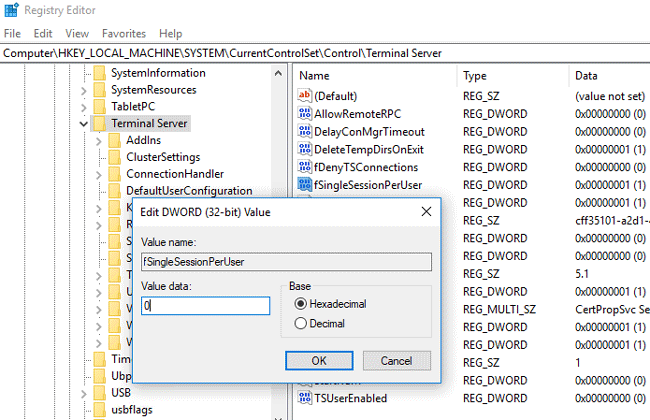 Or you can change the value of the fSingleSessionPerUser parameter with just one command in the cmd with administrator privileges:

In addition, there is another policy in the same GPO section – “Limit number of connections” that allows you to specify the maximum number of RDP connections to this server, but this doesn’t mean that when you specify 99999 connections here, almost 100,000 administrators can connect to this server. Without installing the RDSH role, the number of simultaneous RDP administrative connections will also be limited with two.

After that, you can create a separate RDP session for each remote logon. If you want to use more than 2 simultaneous RDP connections, you will have to install the Remote Desktop Session role on the server and buy RDS licenses to connect users or devices.

In this article, we will show you how to install the Exchange Online PowerShell V2…