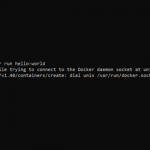 Nowadays software portability has become increasingly relevant. The architecture of computers and operating systems is constantly evolving; applications become larger in every sense. It often happens when administrator needs to transfer the program to another machine without installing and configuring it from scratch. For these purposes, a special software was developed (like Docker). This article describes how to install Docker on Ubuntu and other GNU/Linux systems.

Docker installation is happening in the same way as a regular program. Despite the fact that it has quite complex structure and working principles, it does not need a high requirements for effective work:

Note! With an active VPN connection, the program may crash. In this case, first enable Docker (in particular, the daemon), and then VPN.

There are two versions of this software: Community Edition and Enterprise Edition. The main difference is that when using EE, you can also get advice from the development company on setting up and using Docker at any time. In this example we are using the CE version. It is assumed that prior to the installation, no other instances of this software were installed in the system. Otherwise, delete them.

On Ubuntu, Mint, and other Debian-based systems, Docker is missing from the base repositories.

Next, load and fix the Docker repository key:

Write the Docker repository to the general list of software sources:

Update the list of repositories and install the program:

Here the situation is the same: there is no Docker in standard repositories, you need to add it manually.

First we load the auxiliary utilities:

Turn on the daemon:

On Arch, Manjaro, and the like, the entire installation can be done with one command:

To test the program, load the test container “hello-world” with the command:

Using the run command may be prohibited due to a lack of privileges. To solve the problem, just add the user to the docker group:

View a list of all containers installed on the computer:

More details about all the program options can be listed with the command: