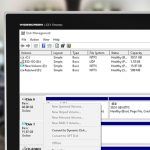 The modern versions of Windows and other operating systems can use one of two standards to store information about hard disk partitions structures. This is an old standard MBR (Master Boot Record) and a new one — GPT (GUID Partition Table). In the Windows OS family, the topic of the GPT and MBR disk partition tables became relevant after the distribution of computers and laptops with pre-installed Windows 10/Windows 8. In this guide, we will show you a several simple ways on how to determine which Partition Table Style (GPT or MBR) has your disk (this can be a standard HDD or an SSD drive) using Windows built-in tools.

Note. GPT replaced the MBR (uses BIOS) as a new standard for placing tables on a physical disk. In turn, GPT uses UEFI (Unified Extensible Firmware Interface), which replaced the BIOS. Unlike MBR, which is located at the beginning of the disk (it is a  boot sector), GPT is a partition table on the disk (GUID table) and assigns a unique global identifier to the each partition. In Microsoft Windows, the partition table reserves 128 entries, which allows you to create up to 128 partitions. The important difference between the GPT partition table and the MBR is the ability to create a partition larger than 2 TB on the disk.

In order to determine which partition table is used by your disk (GPT or MBR), there are three useful, simple and accessible tools: Disk Management snap-in, command-line utility Diskpart and PowerShell.

Get the partition style using DiskPart

To get the partition table type for each of the disks that are available in the system, run a Command Prompt with Administrator privileges and execute the following commands one by one: Note the last column in the results of the command list disk. If there is a mark (asterisk), then this disk has the GPT partition style, those disks that do not have such marks — MBR (usually MBR, because there may be other options, for example, the system can’t determine the disk type).

How to recognize the partitioning style on a disk using PowerShell

You can get the partition table style using Windows PowerShell. Run PowerShell console as Administrator and execute the following cmdlet:

For convenience, you can use this command:

In the results of the command, pay attention to the last column named PartitionStyle in which you will see the partitioning style for each disk connected in the system. In our case, Disk 0 has a GPT partition style, and Disk 1 is an MBR disk.