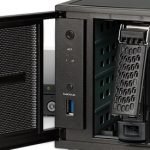 The main difference between NAS (Network Attached Storage) and the file server is that NAS hardware platform and built-in operating system are optimized for disk management and data storage with constant exchange with the network.

In case the employees of your company engaged in photo production, managing and storing video or audio files etc., sooner or later you will begin considering to purchase networked storage systems (NAS). These high-capacity devices allow to access both large and huge numbers of small files in the office, or outside of it.

What to Know When Choosing Network-Attached Storage (NAS)?

NAS are excellent machines, perfectly suitable to use them for data backup, as well as processing and storing streaming content from external laptops and tablets.

Let’s try to figure out what to look for when choosing a NAS device.

When choosing a NAS at first you need to decide on the form factor: whether you need a rack-mount NAS (for example QNAP TS-431U 4-bay 1U) or in a tower-type case (like NETGEAR RN214).
Rack, as a rule, is more productive, capacious (from 4 disks), fault-tolerant (can have two power supplies), help in solving a larger range of tasks. However, rack is noisier, its design is adapted to work in a special rack and, most likely, you will need a system administrator to manage it.

In general, if you are looking for a NAS for a home or small office, then the classic Tower will suffice. In the case of medium business, production or corporate needs, it is more likely to choose a powerful rack-mount NAS.


Classic Tower models are also very flexible and functional, but comparing with the rack-mount models have a wider range. It is generally accepted that as more the slots in a network storage, as the higher class it belongs to. Conditionally for the class NAS can be divided as follows:

When choosing a network storage with several compartments for hard disks, you should pay attention to the next things:

Many modern NAS can work well with a majority of the hard drives offered on the market, but some models of network storage have limitations on volume size of installed disk.

To ensure high performance and fault tolerance of data storage in most NAS models, you can use RAID arrays:

In most cases, the use of RAID allows to survive the loss of one or even several disks without loss of data, which are immediately duplicated for replacement and can usually be entered in the “hot mode”.

NAS is better to choose with improved processors and increased memory.

As processors, manufacturers can use simple Intel Atom in budget versions, and in top-end models Intel Xeon, Intel Core, Intel Atom or Quad Core. In different NAS models, Intel Celeron processors, ARM Cortex-A9 are also aimed at. Some NAS models have ARM processors. The devices on such processors are suitable for use at home or in a small office where the number of connections to network storage drives is small (but we don’t recommend such network devices).

In addition to the processor and the network controller, overall performance and the simultaneous number of connections are affected by the amount of RAM. A typical rule is that 1 GB RAM is required for each TB. This means that a 16TB NAS array must have at least 16 GB of RAM.


It should be noted that NAS assembled on the ARM processor is more difficult to modernize or repair itself, because RAM and the processor are soldered directly to the motherboard, rather than using special slots.

Most modern NASs for SOHO have their own Wi-Fi access points, which means that users can connect using laptops, smartphones and tablets (without cables and a router). This reduces the number of permanently entangled wires, and even such NAS can serve as wireless Wi-Fi boosters for existing networks (Buslink WNR1000U 1TB Echoii Wi-Fi NAS).

This built-in function is especially useful for NAS users who will use streaming multimedia products, downloading images or performing fast edits of large video files.

There are two main NAS brands that are well-known vendors: Synology and QNAP. Other well-known NAS manufacturers are WD, D-Link, LenovoEMC, Seagate, and Netgear.