GNU/Linux system administrator involved into a huge number of tasks. The most significant of these include checking the OS’s network usage. GNU/Linux has many tools that allow you to monitor and analyze the network of both the desktop PC and the corporate server.

Such tools are presented with a graphical interface or functioning only through the command line (sometimes developers combine this). In each of these cases, there are advantages and disadvantages. The most important, but conditional difference: graphical utilities of the YaST or KDE System Guard type are usually distinguished by ease of use and simplicity, while console utilities are distinguished by their flexibility and informativeness, but are slightly more difficult to use.

Most often it is the server that has to be administered, and it usually has a console only, even without a window manager. By the way, working in the console, you can better understand how the specified tool works, even if it has a window version.

This article shares the list of the most common and useful console utilities for network monitoring.

This program is especially popular with GNU/Linux administrators, as its capabilities in network analysis are simply amazing. It can be used only in console interactive mode, which allows you to see quite clearly and in detail what is happening with network packets.

The program is in the software store of most distributions.

To install it, run the following command in the console:

To run the utility, execute the iptraf command (or iptraf-ng, if it is an Arch-like distribution) with superuser privileges, after which the main program window will appear. 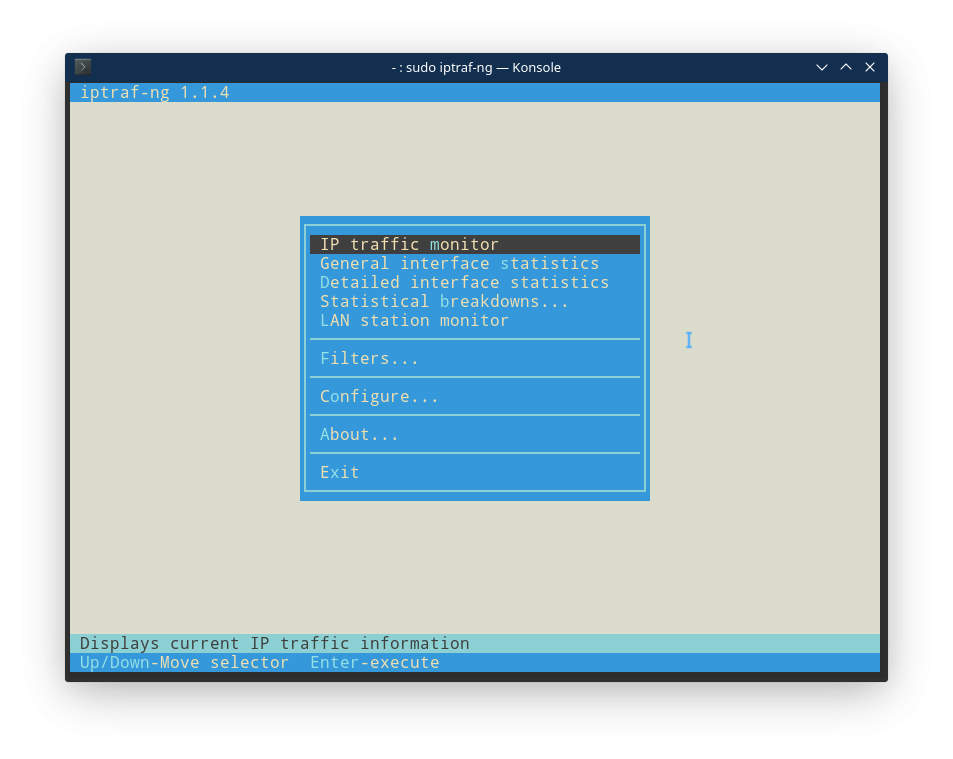 A list of available tools for complete network monitoring is provided.

Note! At the bottom of the program window, additional information about the selected tool, as well as keyboard navigation tips are displayed. 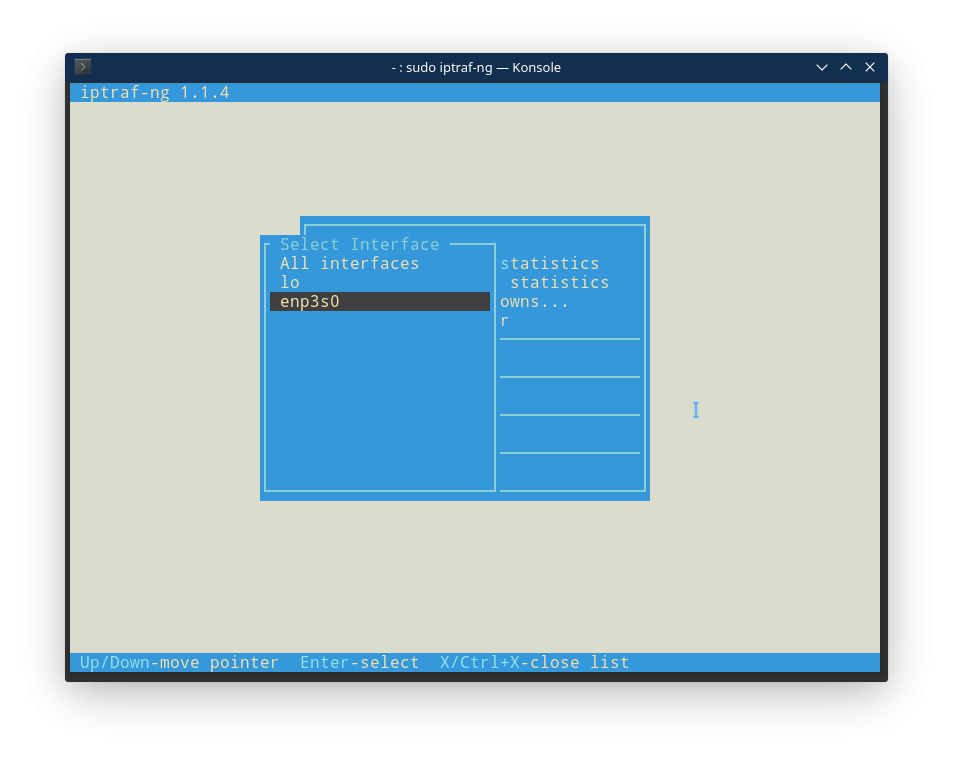 After a while, the screen will display the IP addresses that interact with this network card, as well as the information about the transmitted packages, their direction and volume, expressed in bytes. 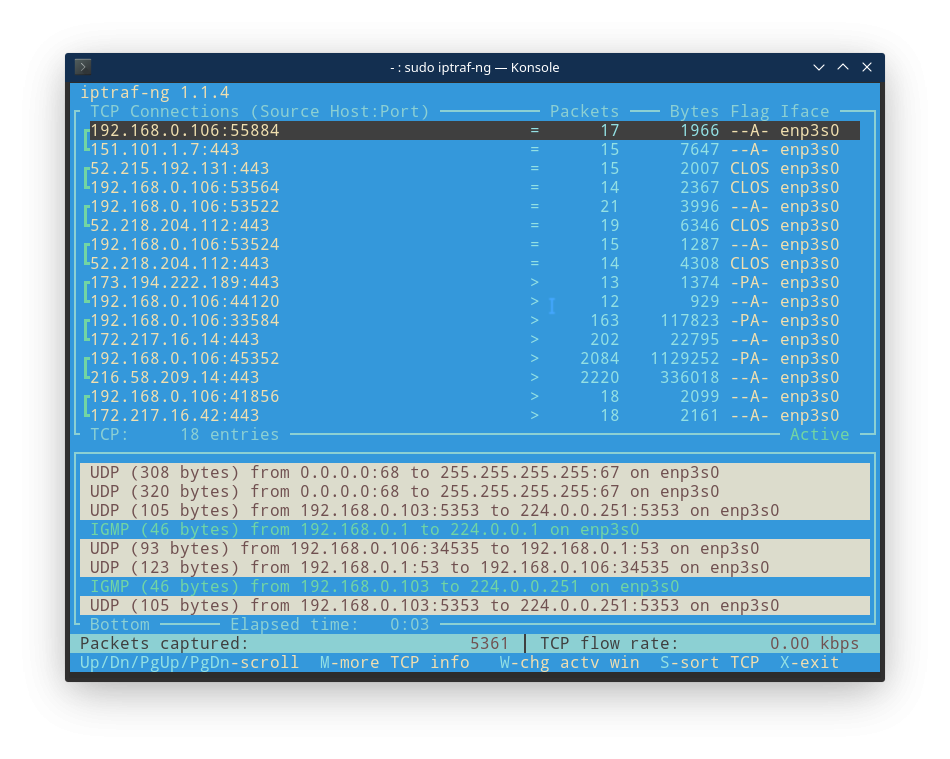 This program has a simpler look. It shows less information than iptraf, but it is also useful and informative with the features that it provides when checking network usage on Linux.

To install it, use one of the following commands: 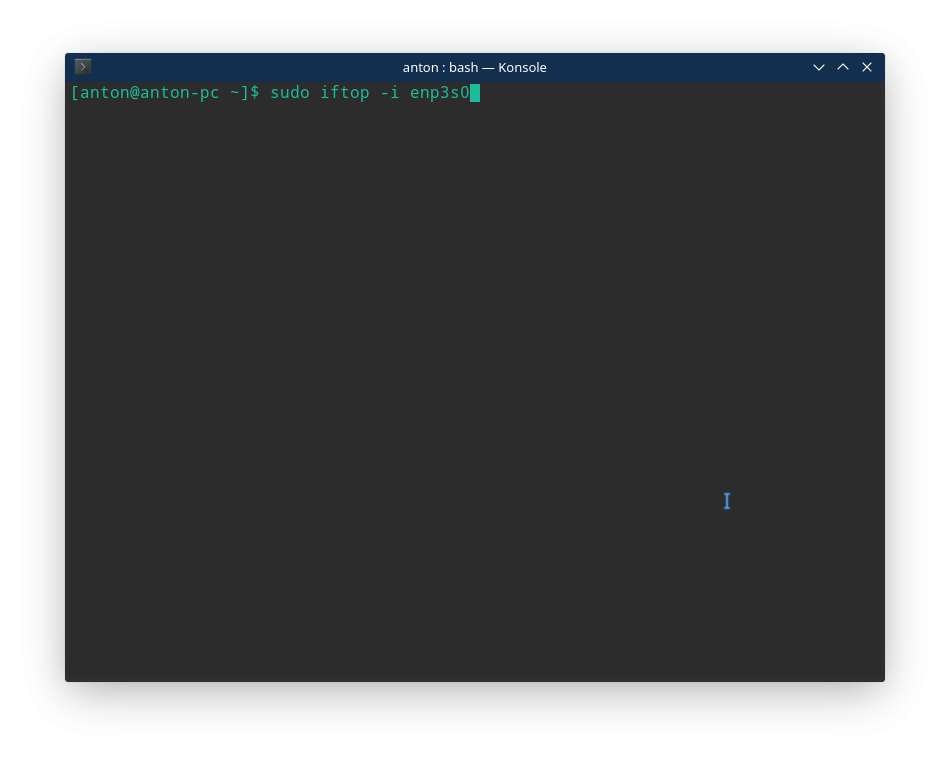 Details of each connection are shown here, but the utility does not identify the object that creates the packages. 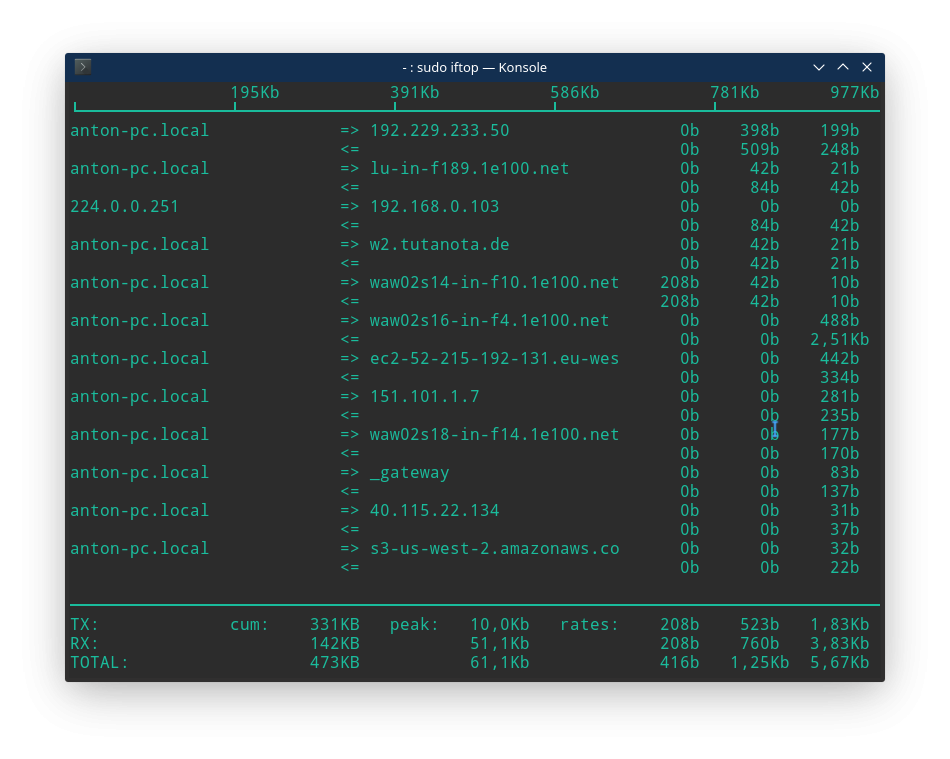 Detailed information about the program can be found through the man iftop command.

An extremely simple console tool that shows the transmission speed of packages in streaming mode, including the current, average, minimum, maximum, as well as the total amount of transmitted and received information.

It can be installed by one of the commands:

To run it, you need to use the nload command. 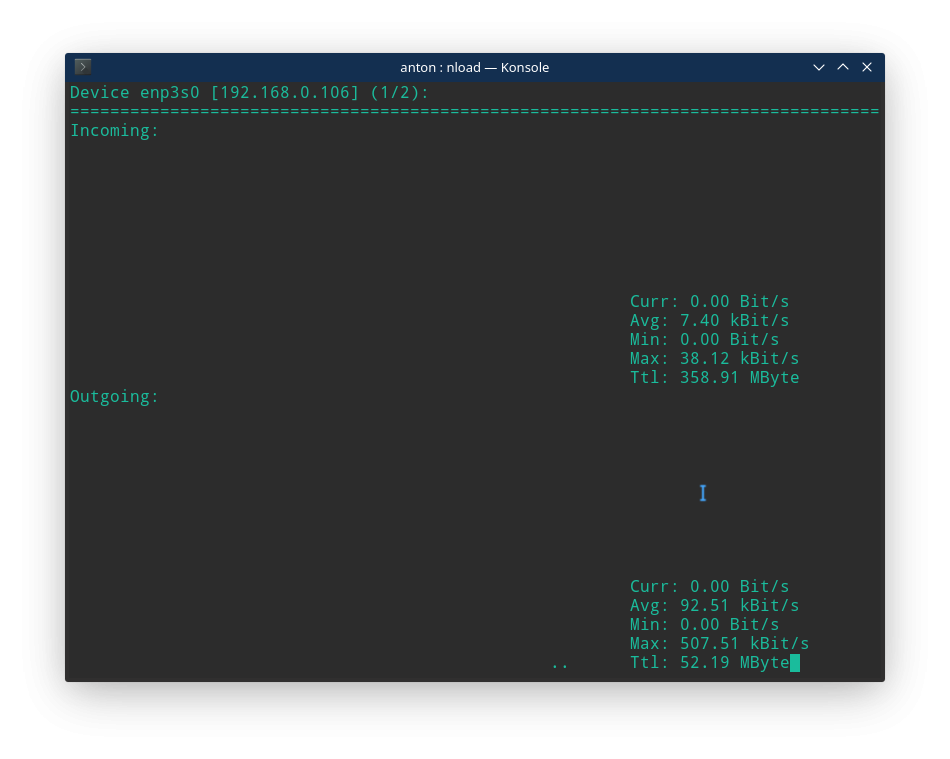 Unlike other network tools, nethogs shows the identifier of the process (PID) involved in sending or receiving network packages, and the user on whose behalf it was launched.

The installation of the utility can be done using one of these commands:

It is launched with the command by the name of the package. 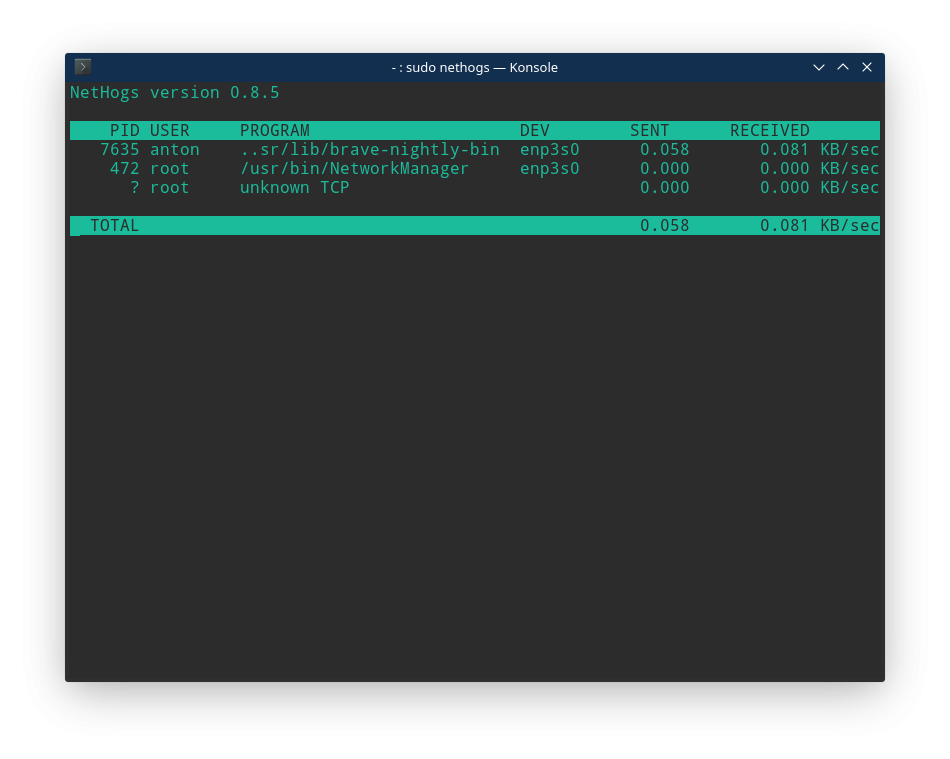 This program displays detailed statistics for all network interfaces, including a pseudo graphic representation of data.

It can be installed from the software store of most distributions:

The program starts by the name of the package. 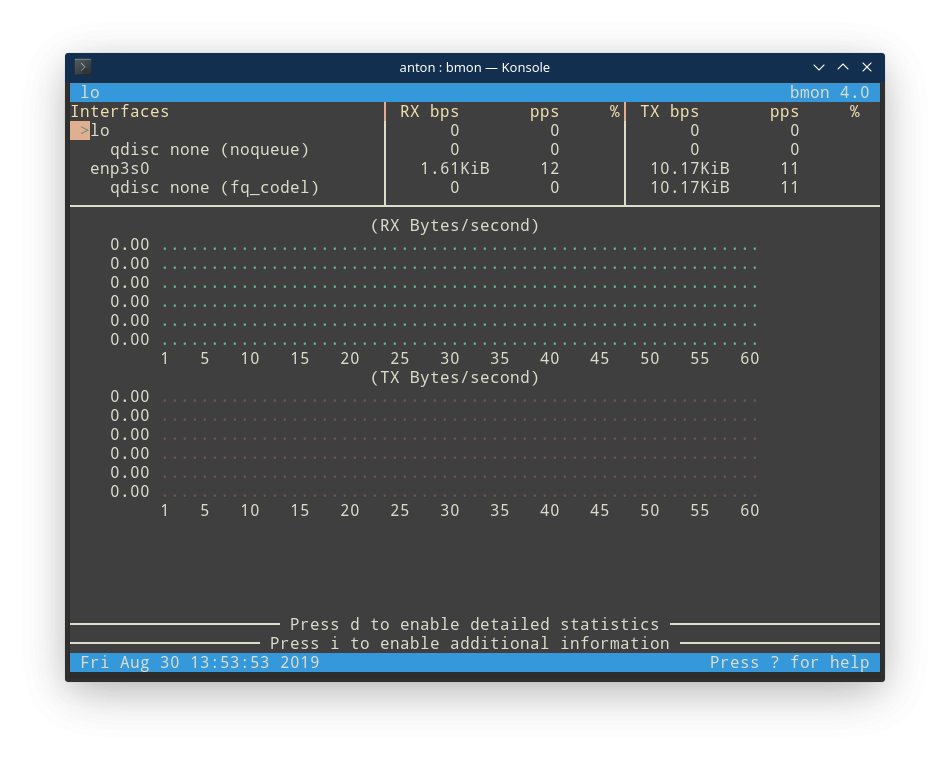 To display help, press ?. To close the program, press q.

This utility has features that will be useful in special cases. This is a daemon that collects network operation data into a log. After that, you can do a load analysis for the specified period.

First you need to install the utility from the standard repository:

Then you need to start the daemon:

Now you can check its work status:

The program will collect data for some time. Viewing statistics is available by the vnstat command. 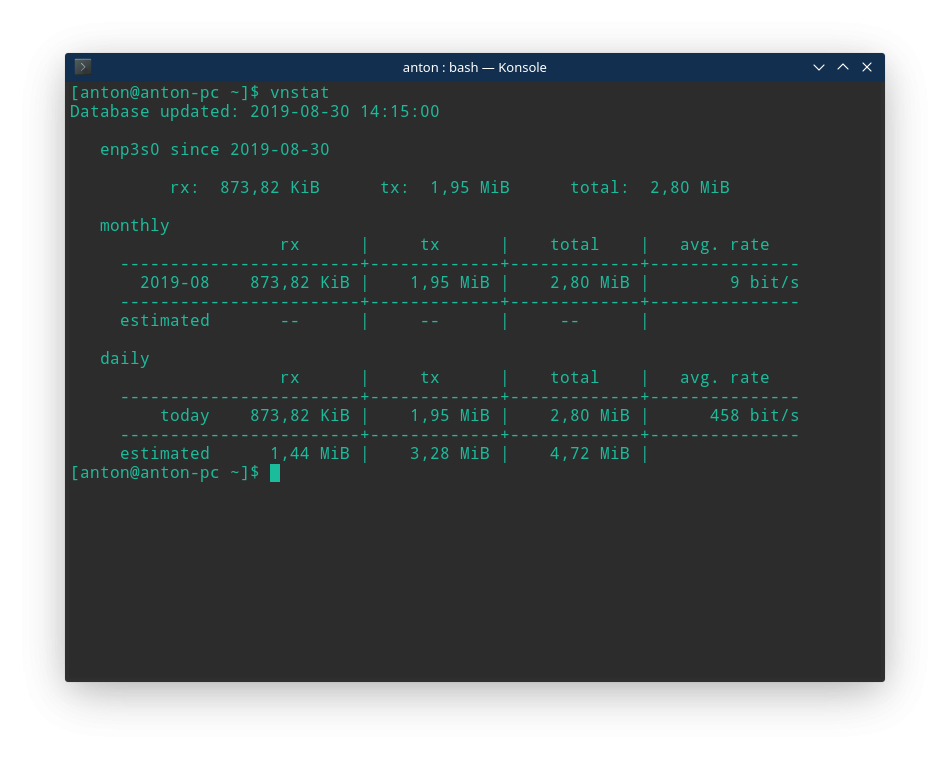 Also, statistics can be monitored in streaming mode using the -l flag. 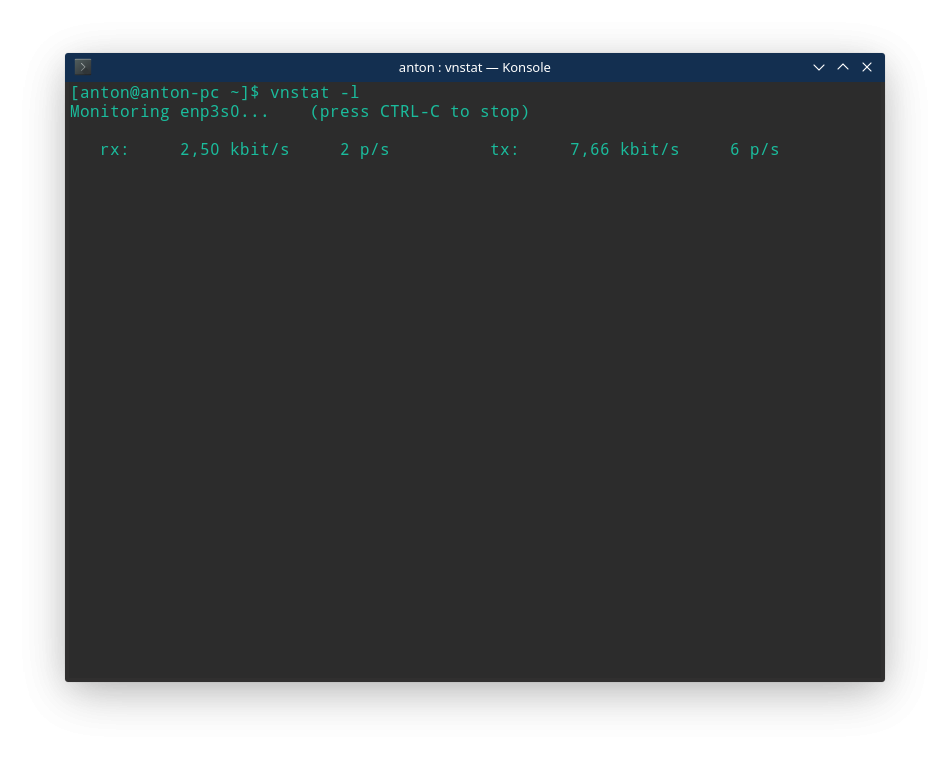 Another small program that displays network load in streaming mode. It works with all available network interfaces.

To install it, use one of the commands:

It starts by the name of the package. 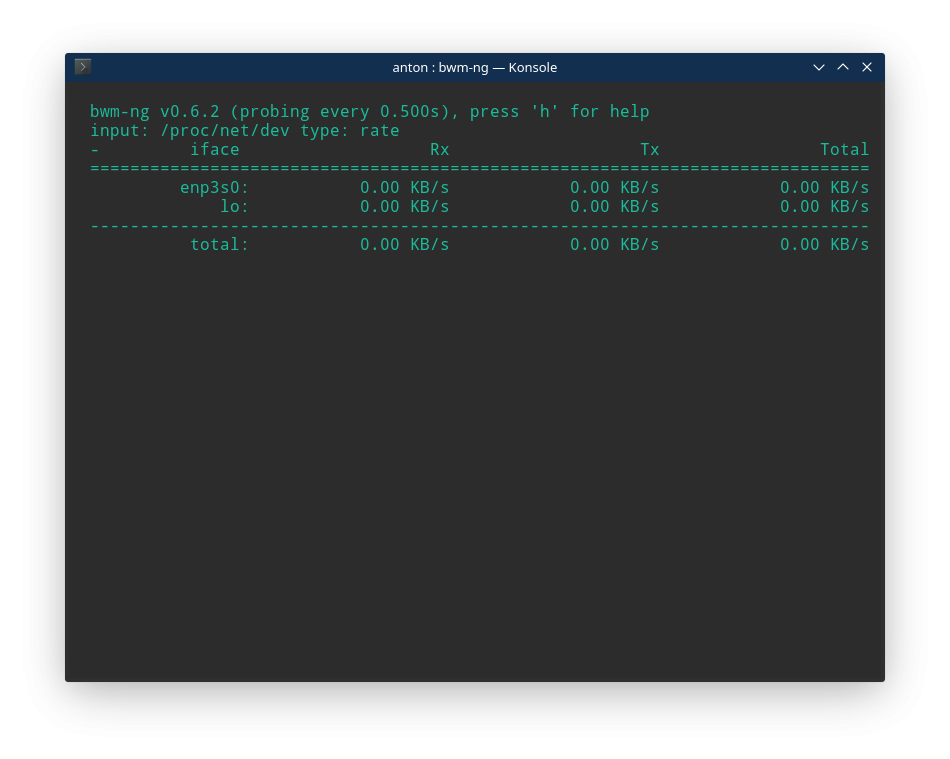 The program is quite functional (more on this you can find in man bwm-ng). One of the most convenient features is an ability to export information to a file of various types, including csv and html, for its further analysis.