Among the wide variety of GNU/Linux distributions, there is one that combines almost all advantages and disadvantages of these systems (of course, there are more advantages). It’s about Arch Linux. Developers still following their original principle that the system should be as simple and functional as possible.

New GNU/Linux users (and even those who have switched from Ubuntu, Mint, etc.) may consider Arch rather unfriendly and even rude. But the things are not like that. The distribution just communicates with the user in slightly more “smart” language, offering him all power over himself. This is a rather interesting step in studying the operation of the OS “from the inside”. The text describes how to install Arch Linux from USB Flash.

If you plan to install the system on a separate disk which is free and empty, then there is no preparatory operations are necessary. In another case, you must allocate disk space specially for the new OS. To do this in Windows 10:

After that, Unallocated section will appear in the list, on which Arch will be installed.

Step 2. Downloading and Verifying the Image

Arch Linux is distributed free of charge on the official website. It offers several download options, including via http.

Use magnet link or get a torrent file; it will be much faster than using http or other.

After downloading, it is considered a good practice to verify the image: whether it is the file (without modifications) that developers signed. This is usually necessary when downloading not from an official site.

To verify the MD5 sum in Windows 10, follow these steps:

The file with the system takes ~600 MB, therefore, almost any flash drive is suitable.

There are several programs for recording an image, but one of them is especially simple and convenient―Etcher. It is cross-platform and allows you to complete the whole procedure in three clicks.

After recording the image, restart the PC. When a computer is at the stage of POST test (at this moment motherboard logo appears or a text prompts you to press function keys), press the Boot Menu key (depending on motherboard, it can be assigned differently). Usually, it is F11 or F12. After that, select a USB-Flash with Arch Linux.

When a start screen appears with a system logo, just press Enter to select the first line.

Step 5. Connecting to the Internet

After 20 seconds, a console with a ZSH shell will appear in front of you. All actions will be executed under superuser, so be careful.

Small distribution’s size means that all necessary components will be taken from the Web. If you are using a cable, run:

DHCP client will be enabled, after that check Internet access with the line: 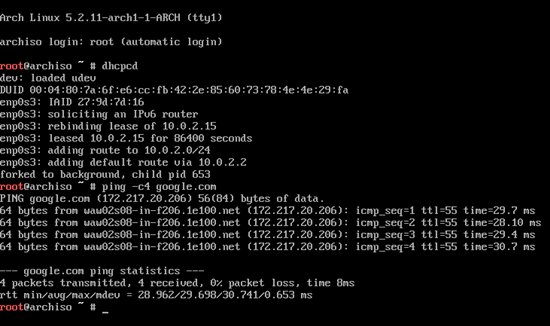 4 packages will be sent to the remote server. If they return successfully, this will be written with fixation of return’s time.

If you are using Wi-Fi, launch the utility: 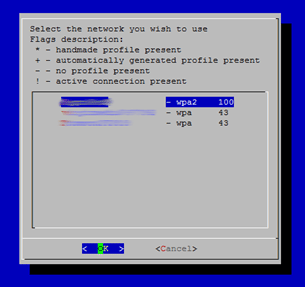 Here, select the desired network and, if necessary, input a password.

To determine and fix the desired timezone, run the following command:

Change America/Lima up to your region. ZSH will tell you what to do if after set-timezone you’ll press Tab twice. A list of all zones opens. Use arrows and Enter to select the desired zone.

After that, apply the changes:

To fix the time correctly even after reboot, enter:

This Arch Linux installation step is slightly different depending on use of BIOS or UEFI, which will be mentioned below.

To find out which device will be used for the new system, run:

The desired device is /dev/sda. First, run a disk management utility with this device:

FOR UEFI: Here you also must allocate section for a bootloader.

Important! Do not overwrite existing bootloader with Windows 10, otherwise, you won’t be able to start it later. Then just connect the partition with this bootloader and write it in /etc/fstab.

The process differs from the above in the following:

Note! According to many users, swap isn’t a required section if the PC has a lot of RAM. The fact is that correct cleaning of memory pages occurs due to swap section. And it does not depend on the size of the RAM. Otherwise, there may be malfunctions in a system in the form of freezes.

Next, you must connect the new sections to the /tmp directory, then start installing system on them.

Make a folder for the GRUB:

You have no guarantee that servers available for download are located as close to you as possible. Therefore, you must manually change a configuration file, where all available servers are indicated, namely, move the one that you need to the top.

Now basic packages are downloaded and installed in the /tmp directory, forming a new system there:

This will take several minutes depending on the server you selected previously.

After installation, it is necessary to carry out a basic system configuration.

First you must create a fstab file for Arch so that you can write auto-mount disks to it:

Next, go to the directory where our Arch is located:

Writing own name for the PC:

Tell the file /etc/hosts about the newly created name:

Also, we need to set up time. For this create a soft link to file that defines a time zone in the /etc/localtime directory:

To enable full support for English, you must include the appropriate locale in the /etc/locale.gen file:

To activate the locale, first remove the “#” character in the desired line by placing the cursor on it and pressing the x key once. 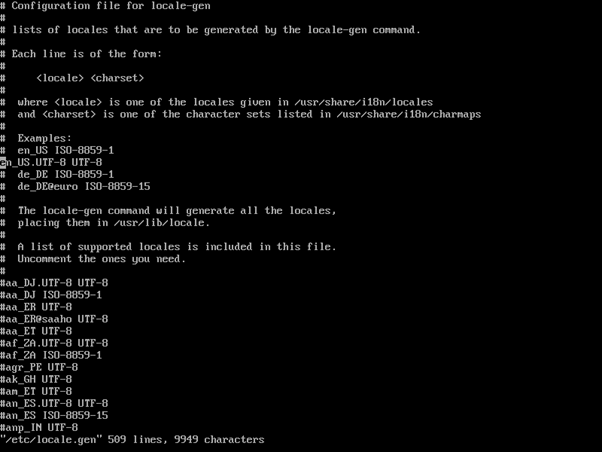 Uncomment other locales if necessary. Write and quit from editor with the already known sequence :wq.

Next make the included locales:

It remains to make the locale.conf and LANG variable in there indicating this locale:

Now setup bootloader, which will boot OS after POST test:

After that, enter this line to setup GRUB to disk used for Arch:

If you encounter an error at this step (not just a warning), add the –force flag before /dev/sda (this often happens when installing in VirtualBox or VMware):

If using multiple systems on a computer, also enter:

When using a wireless connection, also supply the appropriate utility:

Arch has been successfully installed. Before exiting, set a password for superuser, in order to preserve security of the system at least before creating another user. Run the command

You’ll be prompted to enter a new password, then again to confirm. Please note that even asterisks do not appear on screen during password entry.

Now logout from /tmp with the exit command and umount previously attached partitions:

After that, restart the PC and run the disk with installed Arch. Only root user account with the password set earlier will be available to you. After login, start and write Internet-daemon dhcpcd (if you are using cable) in autorun:

Latest posts by Cyril Kardashevsky (see all)
READ ALSO  How to Install Google Chrome on Linux?